The Fallkniven one-eyed Oden (or Woden) is considered the highest ranking god in the Norse sagas. He was the father of the gods and of mankind, riding on his eight-legged horse Sleipner. Accompanied by his bearers of knowledge, the two ravens Hugin and Munin, he was the undisputed ruler of Valhalla. Mod. NL2 Oden is a powerful adaptable knife with its blade in the new laminated VG10 steel. The striking action is excellent and the knife does not feel the least clumsy.

Fallkniven can now present a world first as regards the blade - it's in laminated VG10 steel, where the edge is made of our now renowned VG10 steel and the sides consist of tough, all-stainless 420J2 steel. This combination is unquestionably the best, since it brings together all conceivable and desirable properties such as resilience, resistance to torque and edge-durability in a single blade. With laminate technology one can expect an additional 25% strength in the form of resistance to bending, as compared to an ordinary VG10 blade. This ensures qualities that no other manufacturer in the world can offer.

The handle consists of specially selected ox-hide, sadly a material that is usually overlooked by manufacturers, but which gives a sure and rugged grip. It ages beautifully and as the years pass it acquires an attractive brown patina, and it is unaffected by oil and solvents and impervious to water.

With persisting with the convex edge, since to be consider this to be the ultimate combination of cutting performance and edge strength, and of course the new Northern Light knives feature this. Anyone who knows anything about knife making knows that such an edge can only be made by hand, and that's why 99.99% of all knives don't have that kind of edge. Knives in general are of course mass-produced, where CNC (Computer Numerically Controlled) robots and grinders shape the blades as best they can. The machines are loaded with stacks of blades so that production can go on 24 hours a day and the result is quite often really good - good knives at affordable quotes. 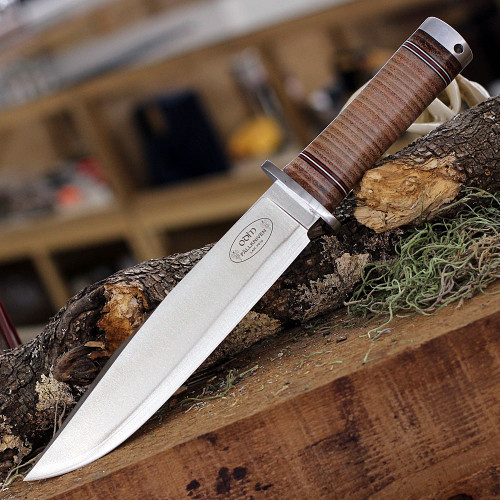