"Skullcrusher’s Xtreme Blade" (SXB) was designed for the Warrior Survivalist to aid in their survival not only in the wild, but on the battlefield as well. Xtreme Situations require an Xtreme Blade, and the SXB meets that demand and then some! Why play in the wild when you can DOMINATE it!!!

EJ Snyder is an Xtreme Survivalist and Adventurer in real life and as seen on TV. He is also a highly decorated, 25-year Army Combat Vet who served in the 1991 Gulf War and Operation Iraqi Freedom. EJ knows what it takes to survive in a multitude of extreme situations from the wilderness to combat, and he has been tested and proven every time.

EJ wanted to design a modern day blade that honors the spirit of the pioneers of the past but meets the demands of an ever evolving modern world, and a tactical survival tool that is as tough, durable, and dependable as he is; one that every warrior, survivalist, and outdoorsman couldn’t live without. The SXB is the Xtreme Tool for any Xtreme Job!!!

EJ's quest for such a knife started on the Serengeti Plains of Tanzania, Africa while conducting a 21 day Xtreme Survival challenge on "Naked and Afraid". The knife EJ took with him, being the only piece of equipment he had, did not perform well in the field and became non-functional. It is potentially disastrous to be out there and unable to rely on your knife. Upon his return to the U.S., EJ tested many knives, sought out the advice of many top custom knife makers he personally knew, and spent countless hours researching all aspects of the art of knife making. A lot of influences, needs, and rigorous tests went into the thought process and design behind the SXB. His 2 year journey culminated with the creation of his vision by TOPS Knives.

The "Skullcrusher Xtreme Blade" (SXB), for all your Survival and Fighting needs. When you need it most...this BEAST will take you to the Xtreme!!! BAD guys and BAD situations...you've just been put on notice! "THE SXB.....DON'T JUST SURVIVE...DOMINATE!!!" 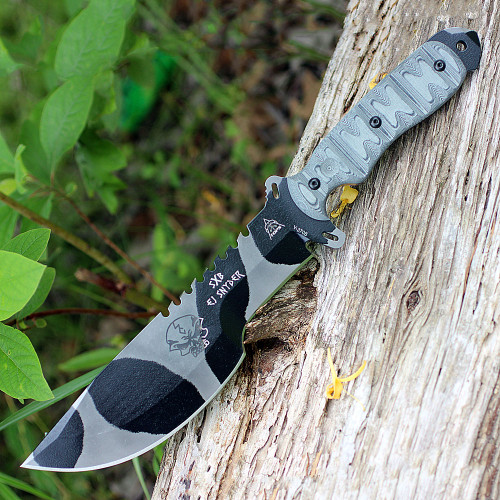