GLO-TOOB's were originally designed as a safety light for Divers to overcome the various problems associated with Chemical Sticks. Battery driven, and offering many hours battery use, these GLO-TOOB's are virtually indestructible, waterproof to 3000 meters, 100,000 hours LED use and almost maintenance free. The various uses have both civilian and military applications.

Both models of the GLO-TOOB (FX and Original) are available in five colors - red, amber, blue, green and white. The Original GLO-TOOB has a single operational mode - steady on 100% brightness. The Glo-Toob FX has 7 pre-programmed modes that can be scrolled through providing CID to at least 7 different units or formations. Each unit is powered by an inexpensive 12V (23A) alkaline battery which is readily available at a nominal cost. This battery will power the unit for approximately 30 hours (8 hours maximum brightness) after which the battery can be replaced. The GLO-TOOB is waterproof to any depth, but please ensure that the cap is tightly screwed on before submersing the GLO-TOOB in water. One unique feature is that you can switch the unit on and off underwater - just don't confuse the switch for the cap! The GLO-TOOB is also virtually indestructible - it can be dropped, thrown, or even driven over without affecting the operation of the unit. The shape of GLO-TOOB is cylindrical, measuring 70mm x 19mm (2.75" x 0.75") and weighing a mere 34g (0.075lb) - small and light enough to carry in your pocket or as a keyring. 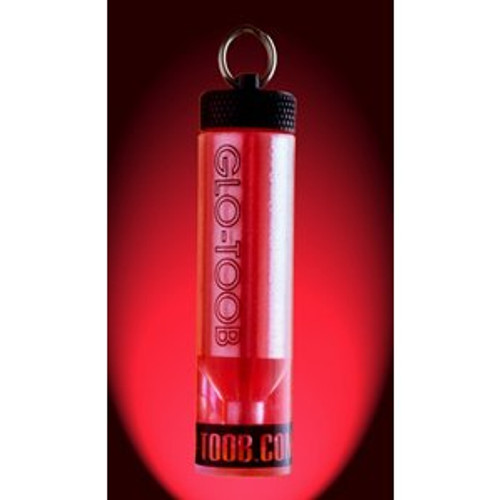