The orange beam combines some of the aspects of both the red and the yellow, making it very bright. It doesn't disturb night vision as much as yellow, and illuminates things better than red. Uses 1 Lithium CR 2032 batteries. Burn time 120 Hours

Dual Function On/Off Switch. The Photon II features a convenient on/off switch for continuous use in addition to the standard squeeze button.

Gold Plated Leads! Gold plating in the Green, Turquoise, Blue, & White LED leads improves the electrical contact with the battery and also protects the Photon light from corrosion. up to 120 hour battery life. The replaceable CR2032 Lithium battery will power the Red, Orange, & Yellow Photons for 120 hours of continuous use. The superbright Green, Turquoise, Blue, & White Photons will run for 12-14 hours with the included CR2016 Lithium batteries. Compare to about 5 hours from a typical C-cell flashlight.

Incredibly tough Glass-filled Polyurethane construction. The polyurethane case of the Photon II is practically indestructible and is very abrasion resistant.

Unbreakable LED Bulb. The LED bulb is incredibly tough and is covered under the manufacturer's lifetime guarantee.

Hides under a quarter and is the same weight, a mere 5 1/2 grams.

Visible for more than a mile! We have been out to two miles and can still signal.

NASA Approved! Photon lights have been used by astronauts on several shuttle missions. The white Photon II was used as gifts to the Russian Cosmonauts on a recent mission to the MIR Space station.

Used alone or easily attaches to key ring or zipper. 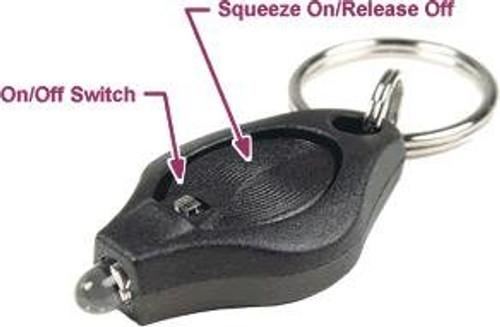